This website is out of date and being updated.
Weight Loss Camps – Weight Better Than A Fat Camp! (914) 271-4141 office(at)campshane(dot)com

At Camp Shane weight loss camps, we understand that that dietary and physical activity behaviors of children and adolescents are influenced by many sectors of society, including families, communities, schools, the media, the food and beverage industries, and entertainment industries.

In a trailer for the new HBO documentary series “Weight of the Nation,” a teenage girl sums up our country’s obesity problem nicely. “You don’t crave broccoli, and our generation has grown up craving a Big Mac,” she says.

If that doesn’t scare you, the litany of grim facts the series presents will. More than two-thirds of American adults and nearly a third of children and teens are overweight or obese. Few of us get enough exercise, and many of us drink too much sugary soda and eat too many processed, fatty foods. It’s costing the country about $147 billion in obesity-related health care costs, and we’re staring at the real possibility that the next generation will live shorter lives than we do.

“We evolved in a world of want, where food is scarce and the ability to hold on to calories meant survival,” says John Hoffman, executive producer of the series and vice president of HBO Documentary Films. “Now we live in world of plenty, where food is all around us. When we see food, we are compelled to eat it.” 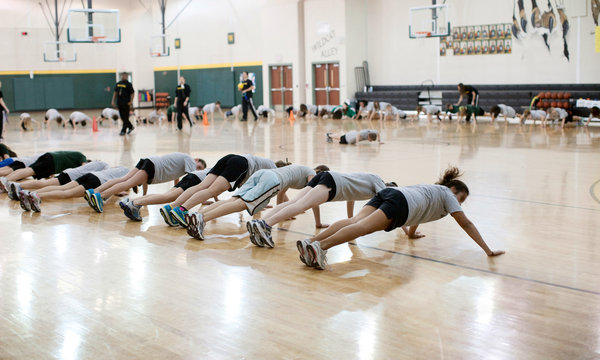 A scene from the “Children in Crisis” segment of “The Weight of the Nation,” on HBO this week.

The HBO series (made in collaboration with the Institute of Medicine and in association with the Centers for Disease Control and Prevention and the National Institutes of Health) urges viewers to take a realistic look at the fattening of our country — and do something about it. Using sobering case studies and interviews with health experts, it examines the causes and consequences of obesity.

Obesity contributes to five of the 10 leading causes of death in America, including heart disease, type 2 diabetes, cancer, stroke and kidney disease. Studies show that once you’ve gained weight, even if you lose it, your body will work to return to that previous high.

“If you understand how your body is fighting to get you back to that previous weight, you know what you’re up against,” Hoffman says. “You have to resist the urges to eat more, and you have to exercise.”

The programs address knotty issues, including the small amount of physical education instruction most American high school students receive, despite the U.S. Department of Health and Human Services’ recommendation that they get an hour of exercise a day.

“We’re not making this a priority in this country,” Hoffman says. “We have challenges before us as a nation to get on a path to much better health. That means we look at the food we grow, food we manufacture, how pervasive marketing of unhealthy food is and how we have to renovate our own lives and the communities we live in.”

For more information or to watch a trailer of the documentary, go to hbo.com/theweightofthenation.

The first and second installments, “Consequences” and “Choices,” will air starting at 7 p.m. May 14 on HBO. The third and fourth installments, “Children in Crisis” and “Challenges,” will be shown starting at 7 p.m. May 15. The programs, available in English and Spanish, will air repeatedly throughout May on HBO. They’ll also be available free on HBO.com.

About the Author: David Ettenberg

Since 1968, thousands of parents have entrusted us with their children. You love and want the best for your child, just as we do for our own children. That’s why we run extraordinary weight loss camps that everyone is proud to be a part of – kids, parents and staff. We maintain high ethics and an overriding commitment to care. Read More...