This website is out of date and being updated.
Weight Loss Camps – Weight Better Than A Fat Camp! (914) 271-4141 office(at)campshane(dot)com

At our weight loss camps, we strive to give campers the tools they need to maintain a healthy lifestyle long after they leave camp. This is more important than ever as obesity and the form of diabetes linked to it are taking an even worse toll on America’s youths than medical experts had realized. As obesity rates in children have climbed, so has the incidence of Type 2 diabetes and a new study adds another worry: the disease progresses more rapidly in children than in adults, and is harder to treat.

“It’s frightening how severe this metabolic disease is in children,” said Dr. David M. Nathan, an author of the study and director of the diabetes center at Massachusetts General Hospital. “It’s really got a hold on them, and it’s hard to turn around.”

Before the 1990s, this form of diabetes was hardly ever seen in children. It is still uncommon, but experts say any increase in such a serious disease is troubling. There were about 3,600 new cases a year from 2002 to 2005, the latest years for which data is available.

Why the disease is so hard to control in children and teenagers is not known. The researchers said that rapid growth and the intense hormonal changes at puberty might play a part.The research is the first large study of Type 2 diabetes in children, “because this did not used to exist,” said Dr. Robin Goland, a member of the research team and co-director of the Naomi Berrie Diabetes Center at Columbia University Medical Center in New York. She added, “These are people who are struggling with something that should not happen in kids who are this young.”

The study followed 699 children ages 10 to 17 at medical centers around the country for about four years. It found that the usual oral medicine for Type 2 diabetes stopped working in about half of the patients within a few years, and they had to add daily shots of insulin to control their blood sugar. Researchers said they were shocked by how poorly the oral drugs performed because they work much better in adults.

The findings, published by The New England Journal of Medicine, could signal trouble ahead because poorly controlled diabetes significantly increases the risk of heart disease, eye problems, nerve damage, amputations and kidney failure. The longer a person has the disease, the greater the risk. So in theory, people who develop diabetes as children may suffer its complications much earlier in life than previous generations who became diabetic as adults.

But aggressive treatment can lower the risks. “You really have to be on top of these kids and individualize therapy for each person,” said Dr. Barbara Linder, a senior adviser for childhood diabetes research at the National Institute of Diabetes and Digestive and Kidney Diseases, which sponsored the new study.

Sara Chernov, 21, a college senior from Great Neck, NY, learned that she had Type 2 diabetes when she was 16. Her grandfather had had both legs amputated as a result of the disease, and one of the first questions she asked was when she would lose her legs and her eyesight. A doctor scolded her for being fat and told her she had to lose weight and could never eat sugar again. She left the office in tears and did not go back; soon after, she joined the study at Columbia. Like many of the children in the program, she did not even know how swallow a pill. 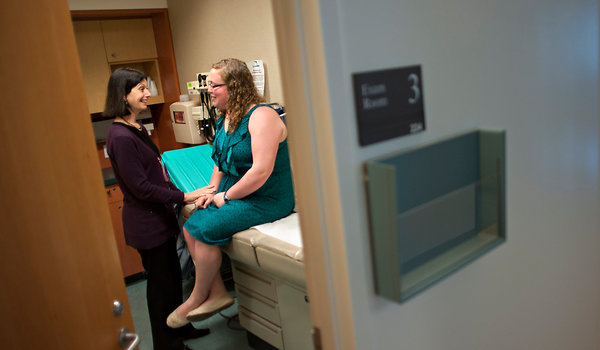 Sara Chernov, who was found to have Type 2 diabetes at 16, with Dr. Robin Goland of Columbia University Medical Center.

Most of the participants in the study came from low-income families: 42% had yearly incomes under $25,000, and 34% below $50,000. About 40% were Hispanic, 33% black, 20% white, 6% American Indian, and less than 2% Asian. Poor people and minority groups have some of the highest rates of obesity and diabetes in both adults and children.

Ms. Chernov believes that the disease “is not a death sentence,” if she is careful about controlling her blood sugar. But it has been a struggle. Her family tends to be overweight, she sometimes craves sweets, and she has orthopedic problems that have required surgery and have made it hard for her to exercise. She is also being treated for high blood pressure. A few weeks ago, because her blood sugar shot up despite the diabetes pills she was taking, Ms. Chernov began using insulin.

Dr. Phil Zeitler, an author of the study and a professor of pediatrics at the University of Colorado, Denver, said many participants lived with a single parent or guardian and, like Ms. Chernov, came from families with a history of diabetes and had relatives with kidney failure or amputations. “They’re wrapped up in a lot of family chaos,” Dr. Zeitler said, calling them a “challenging population” with a lot of stress in their lives, on top of the normal chaos of the teenage years.

Type 2 diabetes used to be so rare in children that it was called adult-onset diabetes. Type 1, a much less common form, was most likely to strike children and teenagers, and was called juvenile diabetes. Both forms of the disease cause high blood sugar, but their underlying causes are different. (Type 1 occurs because the patient’s own immune system mistakenly destroys the cells in the pancreas that make insulin, a hormone needed to control blood sugar levels. Patients have to take insulin.) Type 2 is thought to be brought on by obesity and inactivity in people who have a genetic predisposition to develop the disease when they gain weight. And they may also have an inborn tendency to put on weight. The pancreas still makes insulin, though not enough, and the body does not use the insulin properly — a condition called insulin resistance. High blood pressure and cholesterol often come with the disease. Initial treatments include dietary changes, exercise and oral medicines, but many people eventually need insulin.

Doctors began noticing an alarming increase in Type 2 cases in children in the 1990s, especially among blacks and Hispanics from poorer families. The problem had started even earlier in American Indians, who have had sharp increases in obesity in recent years.

The current study was meant to find the best treatment. The participants were all overweight, some very obese. All, with a parent or guardian, got diabetes education. They were then assigned at random to one of three groups. One group took only metformin, a standard diabetes pill (also called Glucophage). Another took metformin and a second drug, rosiglitazone (also called Avandia). A third group took metformin and went through an intensive diet, exercise and weight-loss program (which has worked in adults). They were followed for an average of about four years.

The results were disappointing: all three regimens had high failure rates, meaning that they could not control blood sugar. Metformin alone failed in 52 percent of patients, metformin plus rosiglitazone failed in 39 percent, and metformin plus the diet program failed in 47 percent. Metformin alone was least effective in blacks, and metformin combined with rosiglitazone worked better in girls than in boys. The failure rates were high even in the patients who adhered most strictly to their treatment programs.

The obvious conclusion is that better treatments are needed. Adding rosiglitazone is not a good option, researchers say, even though the combination worked better than metformin alone; rosiglitazone has been linked to an increased risk of heart attack and stroke in adults, and its use has been restricted by the Food and Drug Administration. There are other oral diabetes drugs, but none have been approved or tested in children. In the meantime, the doctors said, the best solution is to move quickly to insulin shots if metformin does not work.

Ideally, Type 2 diabetes should be preventable with improvements in diet and exercise. But so far, that has been easier said than done.

About the Author: David Ettenberg

Since 1968, thousands of parents have entrusted us with their children. You love and want the best for your child, just as we do for our own children. That’s why we run extraordinary weight loss camps that everyone is proud to be a part of – kids, parents and staff. We maintain high ethics and an overriding commitment to care. Read More...